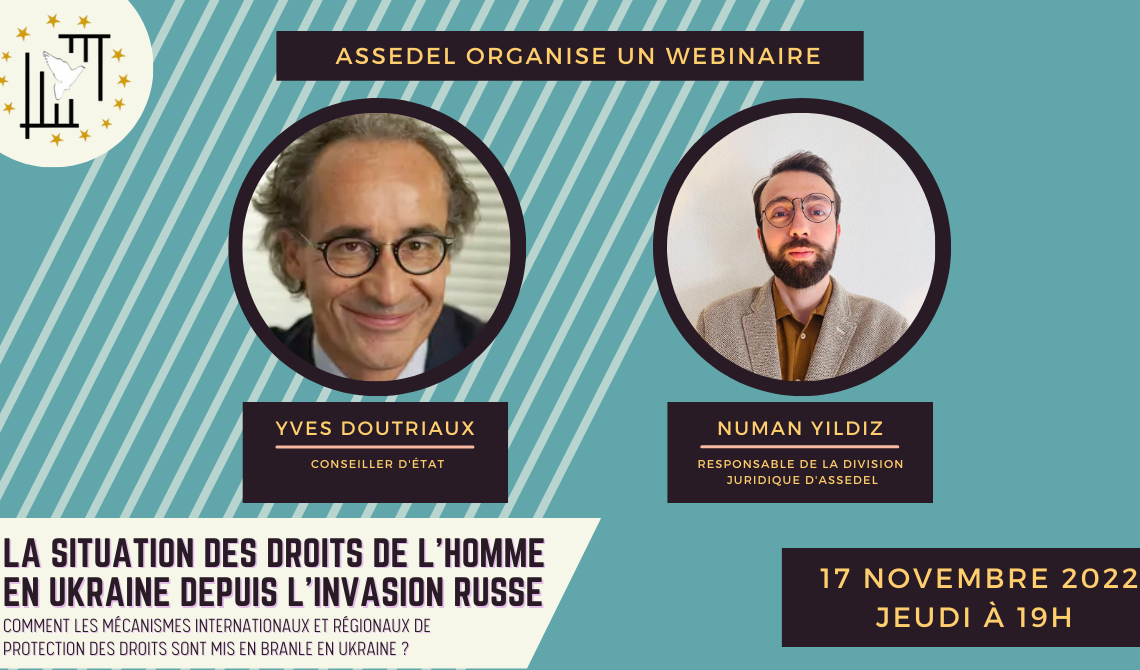 Webinar: The human rights situation in Ukraine since the Russian invasion

The guest of this webinar was Mr. Yves Doutriaux, State Councillor and former diplomat at the UN and OSCE.

Having recently made a presentation on the protection of human rights in Ukraine this summer, in the René Cassin Foundation, Mr. Doutriaux addressed this time, the mobilization of international human rights instruments.

He specifies that these instruments would have been mobilized since 2014, and not only after the annexation of the Crimea, by Russia, after February 24, 2022.

The main of the instruments cited are:

The OHCHR was concerned about the situation and sent a mission with 57 experts and a budget of +7 million euros (financed by the EU and Canada), which was able to raise awareness of the human rights situation among local actors:

Periodic reports have been published, 600 cases of torture and ill-treatment of detainees have been notified, and investigations opened, prisoners transferred, and a lot of dialogue has been done with the Ukrainian side.

However, the UN Charter gives the Russian Federation a veto right, which was used as soon as Ukraine wanted to refer to the Security Council in 2014.

On April 7, 2022, the UN General Assembly excluded Russia from the HRC, with 93 states in favor of the exclusion, 24 against and 58 abstentions.

On March 4, 2022, with the vote of 32 states, the UNHRC established an International Commission of Inquiry into violations of human rights and humanitarian rights in Ukraine. A minority of states support the position of Russia, and a significant group of countries abstain: China, India, South Africa.

The Commission of Inquiry has been tasked with a comprehensive mission to the eastern regions of Ukraine to hold those responsible to account. Russia boycotted the meeting of the UNHRC because according to them, the Council would refuse to consider Ukraine’s violations against Russian speakers. The mission did not have access to Russian-occupied areas of Ukraine.

Ukraine has referred to this court, also as early as 2014. A preliminary examination has been requested from the ICC to open an investigation into any alleged crimes within their jurisdiction. However, this court cannot judge in absentia, which can be problematic.

Has radically ousted Russia from its ranks. With the CoE, the ECHR was also seized

The ECHR, of an injunction to cease all military attacks from March 1.

The president of the ECHR, seized by Ukraine ordered Russia to refrain from any civilian attack, even if it was not applied.

The other international instruments discussed are:

Mr. Doutriaux was kind enough to answer the various questions of the audience.

ASSEDEL is a recognized European human rights advocacy group that focuses on protecting civil liberties and fundamental freedoms. It has been working…
Advisor ProjectNewsProjects

This webinar focused on freedom of expression and its promotion within international and European institutions, with the participation of two panelists: Blaise…