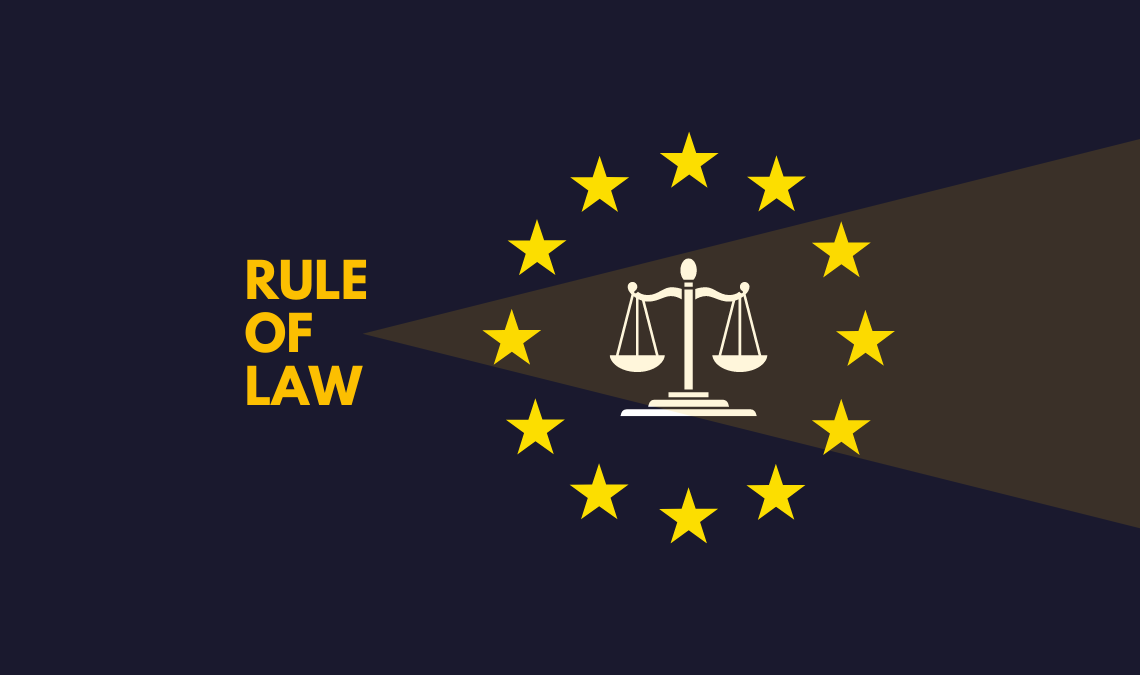 Since the adoption of the Lisbon treaty, rule of law has found a robust legal framework. Article 2 of the Treaty on the European Union (TEU) provides that “the Union is founded on the values of respect for human dignity, freedom, democracy, equality, the rule of law …”. In the sense of Article 49 TEU, respect of these values is a precondition to be a member of the EU. The “conditionality” thus founds different reflections.

For the States willing to join the EU, on the basis of the Article 49, rule of law conditionality appears as a pre-requisite of a being a member state. This mechanism, which is also called as “pre-accession conditionality” used by the EU in order to promote the respect of rule of law in the candidate countries.

When it comes to the Member States which has already committed themselves to respect the founding EU values during their accession, in case of a breach of these values enumerated in the article 2 TEU, including the rule of law, they can be subjected to political sanctions. Namely, by virtue of article 7 TEU, The European Council, acting by unanimity may determine the existence of a serious and persistent breach by a Member State of the values referred to in Article 2. As a consequence, the Council may suspend certain of the rights deriving from the application of the Treaties to the Member State in question, including the voting rights. But since the application of this political sanction mechanism has very severe consequences and the unanimity is very difficult to obtain, Article 7 mechanism is deemed as the “nuclear option”2 and considered as “burdensome and procedurally ineffective”3.

Therefore, as an alternative, a new regulation has been adopted and entered into force as of the 1st of January 2021. “Regulation on a general regime of conditionality for the protection of the Union budget”4, otherwise known as the “rule of law conditionality regulation” gives the Commission the possibility to suspend the access of a Member State to the EU budget in case of a breach of the rule of law which affects or seriously risks affecting the sound financial management of the Union budget or the protection of the financial interests of the Union in a sufficiently direct way.

On the 16th of February 2022, in its long-awaited judgments5 the ECJ has rejected the arguments of the Poland and the Hungary claiming that “Rule of law conditionality Regulation” does not consist with the EU treaties. In this historical judgement the Court has recognized clearly for the first time the binding nature of the principle of rule of law provided in the article 2 Treaty on the European Union by the following words: “it must be borne in mind that Article 2 TEU is not merely a statement of policy guidelines or intentions, but contains values which are an integral part of the very identity of the European Union as a common legal order, values which are given concrete expression in principles containing legally binding obligations for the Member States.” 6.

The importance of this regulation is twofold. First, for the first time this broad principle of rule of law has found a solid and detailed content. Indeed, the regulation has enumerated in which cases the rule of law principle can be considered as violated. Second, by giving the Commission a power to take measures that may go as far as suspending the right of access to its share of the European budget, it has considerably strengthened the compelling force of the principle of the rule of law.

Following the entering in force of this mechanism, the European parliament in a resolution adopted on 10th of March 2022, urged the European Commission to initiate proceedings against the Member States violating the principle of rule of law7.

Concretely, the last Sunday, the 18th of September 2022, The European Commission proposed suspending about €7.5 billion of funds allocated to Hungary over rule-of-law concerns8.

These developments in favor of the effective protection of the principle of rule of law has changed the paradigm. This principle which had been considered for a long time as a very broad and general principle, usually mentioned in non-binding legislation without concrete and direct consequences for violating states, has started to be included in the legally binding framework that provides for important sanctions with direct economic implications.

These developments at the internal level of the EU may raise questions about the possible external implications for the future of its relations with the rest of the world.

Promotion of the rule of law in the external relations of the EU has already a clear legal basis in article 3§5 of the TEU which gives to the EU a mission to “uphold and promote its values and interests in its relations with the wider world”. In this sense the Commission has declared in its joint communication that “the EU is committed to putting human rights and democracy at the center of its external action, as a “silver thread” running through all that it does.” in order to keep the “promise of the Lisbon Treaty”9.

The EU has several instruments to promote principles such as the rule of law. These include association agreements, partnership and cooperation agreements and bilateral preferential trade agreements with third countries.

Additionally, the pre-accession conditionality has been an important mechanism of promotion of rule of law in the third countries desiring to join the EU. It has entered to the rule of law conditionality terminology, particularly, with the Copenhagen European Council10. The conditions such as “guaranteeing the stability of institutions, respecting the democracy, the rule of law, human rights and the respect for and protection of minorities” which are also called as “Copenhagen criteria”, constituted the requirements for an accession to the EU. An eventual membership to the EU has been longtime considered as the highest incentive for a candidate country to meet above-mentioned standards. However, Turkey example has showed that it is not so simple.

Indeed, in Turkey the impact of the accession conditionality was considerable between 1999 and 2004, with two constitutional reforms and seven harmonisation packages adopted11. However, between 2005 and 2018, the loss of political momentum toward accession transformed this positive course into a significant mowing away from the EU with the severe backsliding in the human rights and democracy in Turkey. As a result, in 2018, the European Council stated that accession negotiations with Turkey have “come to a standstill and no further chapters can be considered for opening or closing”12. It leaves no doubt that the pre-accession conditionality mechanism was no longer effective in the Turkish context. However, as mentioned earlier, the EU has other mechanisms than pre-accession conditionality to promote the rule of law and fundamental rights. First and foremost, we can mention the EU’s normative trade power.

The EU is both power in trade and power through trade13. The latter refers to the capacity of the EU to trigger political and structural changes in its trade partner thanks to the incitation of economic benefits of privileged access to the EU market14. This influence on the third states’ internal affairs is called in different terms in the literature: EU’s normative power15, transformative power16 or civil power17. Regional and bilateral preferential trade agreements (PTA’s) and Generalised Scheme of Preferences (GSP) are the mechanisms through which this power can be exercised. Amongst targeted policy areas, one can find trade-related fields such as labour standards, sustainable development goals or non-trade related issues such as democracy, respect for human rights, and the rule of law.

However, despite the considerable trade flow between Turkey and the EU18, the legal framework19 remained highly technical and narrow compared to the new-generation deep and comprehensive trade agreements20 which include political dialogue and close cooperation in terms of justice and fundamental rights, security, energy, transport and the environment.

On the other hand, it would not be unrealistic to think that the economic advantages that Turkey could derive from privileged access to the EU market constitute an important incentive to align itself with the principle of the rule of law.

The modernization of the current EU-Turkey customs union framework, which is almost 30 years old, can be seen as an opportunity to develop a rules-based relationship in which rule of law conditionality is effectively used. One can legitimately expect that the economic incitation of a modernized custom union can enhance the leverage for the respect of the rule of law in Turkey.

To conclude, when we look at developments at the internal and external level of the EU, we can say that respect for the rule of law is and will increasingly be at the center of the EU’s agenda. At the internal level, the recently adopted rule of law conditionality regulation has, on the one hand, concretized the broad concept of the rule of law and, on the other hand, given Member States conditional access to the EU budget on the basis of their respect for the rule of law, thus reinforcing the binding force of the rule of law principle. At the external level, the new generation of comprehensive trade agreements include a very detailed and extensive catalog on the rule of law and fundamental rights. In addition, in order to strengthen their effectiveness, they include a conditionality mechanism allowing for the suspension or reduction of preferential treatment when these principles are not respected.

Taking into consideration these developments, including the rule of law conditionality mechanism in the customs union modernization discussions would be consistent with the EU’s current policy objectives.

18 European Commission, trade policy, countries and regions, Turkey, retrieved 18 April 2022 https://ec.europa.eu/trade/policy/countries-and-regions/countries/turkey/: “33.4% of Turkey’s imports came from the EU and 41.3% of the country’s exports went to the EU”.