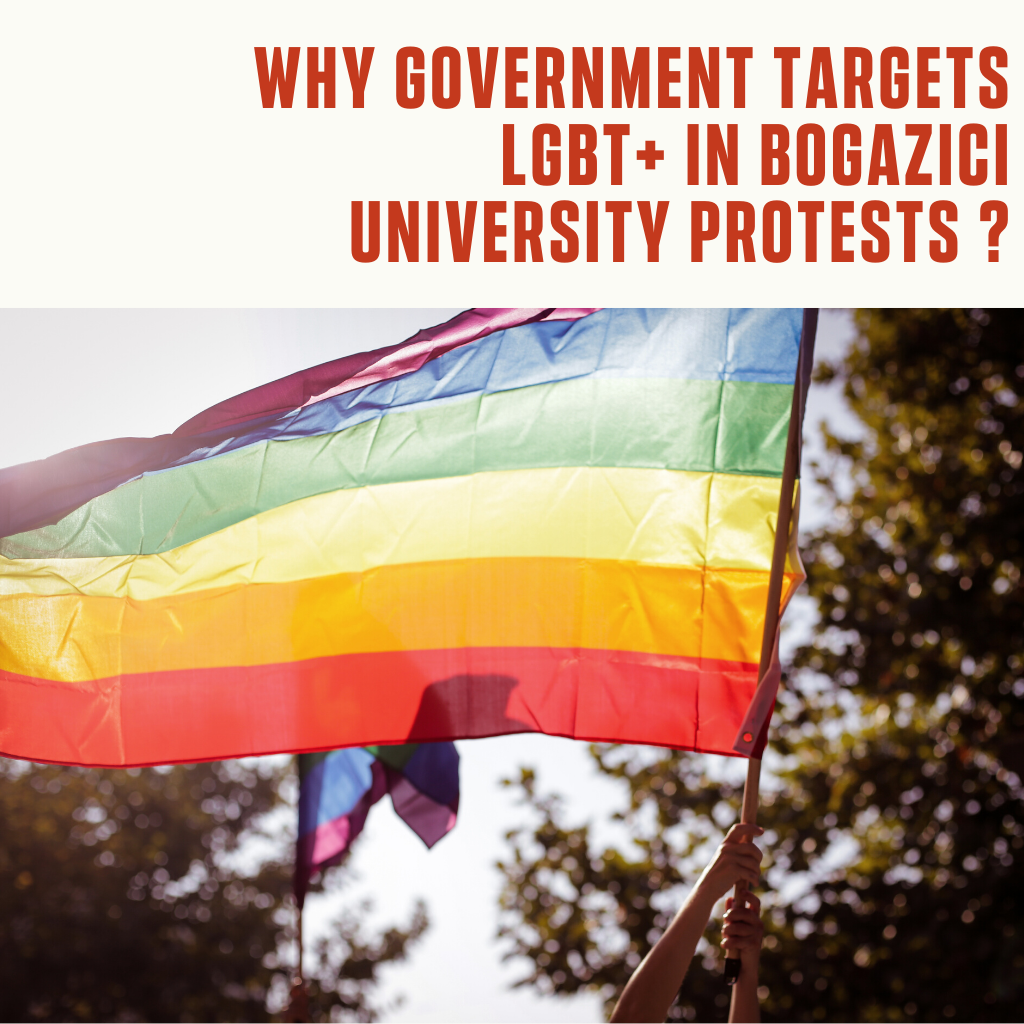 “Are you a student ? Or are you a terrorist who attempted to invade the rector’s room and occupy it? This country will no longer live a protest event in Taksim. Just as we buried terrorists in Mount Judi, in Gabar, in Mount Tendurek, and entered their “dens”, we will continue to do so in the same way from now on. There is no such thing as LGBT. Turkey is a national and traditional country, and walking into the future with these values.”

These sentences, which contain criminal words according to the Turkish Penal Code1, belong to the president of Turkey, who is the guarantee of the constitution. Let’s move on to the analysis of this discourse.

Being LGBT+ in Turkey is very difficult as it is everywhere. According to the Moral Principles and Religious Foundation Employees Union2, it is not a human right to “prefer” homosexuality3. However, according to Nihat Hatipoğlu, who is a member of YÖK4 with the approval of Erdoğan, all kinds of people can be found in society, and according to him, we need to meet “this” with understanding. Even according to Erdoğan’s 2002 version, the rights of LGBT+ should be guaranteed. So why is LGBT+ being attacked during the Bogazici University Protests?

Quick answer: Because there was no other way. Erdogan’s government got stuck in the corner in economy, in social approval and of course in predicted elections.

75 percent of voters in the first vote of the 2018 Turkish General Elections did not vote for People’s Alliance (Cumhur Ittifaki). According to the surveys in September 2020, this rate has not changed6. A detail to be noted is that while 4 million people from generation Z vote in the 2018 General Elections, 9.1 million people from this generation will vote in a possible election at the end of 20217. This makes one out of every 5 voters a member of the Z generation. On the other hand, according to a study conducted in 2018, 71 percent of voters who voted for the AKP are over 32 years old. In other words, in 2018, the AKP received approximately 3 out of 4 of its votes from those born before 19868.

In 2020 the proportion of poor households in Turkey rose %14.4 from %10.49. According to DISK-AR10 2.2 million employees lost their jobs11. According to the graphics below, Turkish economy has entered an irreversible path.

Time is not neutral, and it is currently running against Erdoğan. All this bring us these graph below12.

Social civil unrest is enough to cause an explosion in Turkey rises as countries in a dangerous line. Although difficult to predict, economic and demographic indicators confirm this. After protested during the pandemic, first by law society13, then by shopkeepers14, and then by miners15, the government appointed a rector to Bogazici University and consciously or unconsciously tried to shape the day, on LGBT+ opposition. This was for the benefit of the government in many ways. First of all, LGBT + community in Turkey has no specific guarantee in legal terms. That’s why Minister of Internal Affairs, Süleyman Soylu was able to accuse LGBT + members of heresy16.  Secondly, the structure of Turkish society tends to react too strongly to LGBT+17. Finally,  LGBT+ was tried to be worn out already. By fake news, that shows whistling while calling to pray at the Istanbul Pride18, or with alleged disrespect to the Kaaba during protests,  reputation was already decreased by government. So Erdoğan and his team have a strong card which allows use religious discourse and which will be able to turn back the floating voters again. So they are again intending to marginalize an already marginalized group even more. In other saying,  making LGBT+ enemy is very profitable for the government, because the government can use religious rhetoric, and the answer comes by completely rejecting religious discourse, thereby consolidating the conservative groups.

The government’s religious rhetoric paradoxically works for LGBT+ in long term. Visibility of these activist, of LGBT+ groups is %100 now in Turkey. Considering that Prides, Women’s Day Meetings, and even all meetings are made for visibility, Erdoğan’s mention of LGBT+ has made their visibility in the society 100 percent. A marginal group of people slowly finds its place in society, slowly becomes normal.

It is not known what the course of time and what more integrated world bring us, but it is certain that it will bring a world where LGBT + groups are more visible and got accustomed. The statistics in the world are as follows.

It is not known whether the course of the world or the exclusionary attitude of governments creates this, but these perceptions are gradually changing. Finally, it is impossible to remain neutral to this changing, as we will see in future.

[1] Turkish Criminal and Penal Law, Article 216- (1) Any person who openly provokes a group of people belonging to different social class, religion, race, sect, or coming from another origin, to be rancorous or hostile against another group, is punished with imprisonment from one year to three years in case of such act causes risk from the aspect of public safety.
These protests shall be restricted only by law.

(2) Any person who openly humiliates another person just because he belongs to different social class, religion, race, sect, or comes from another origin, is punished with imprisonment from six months to one year.

[2] Employees union is affiliated with the Directorate of Religious Affairs

[18] While the activists were whistling the police, by chance the call to pray starts. The pro-government media gave a false colour this.