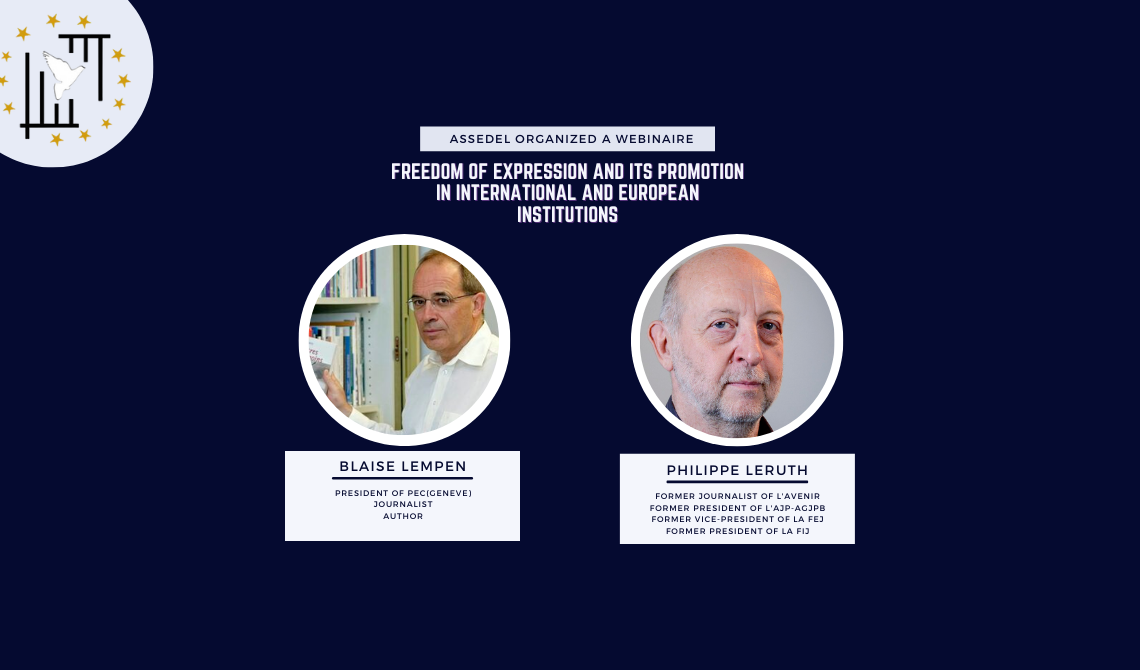 This webinar focused on freedom of expression and its promotion within international and European institutions, with the participation of two panelists: Blaise Lempène, President of Presse Emblème Campagne (PEC) and Philippe Leruth, former President of the International Federation of Journalists (IFJ).

Mr. Leruth first reminded us about the war in Ukraine where 12 journalists and press collaborators lost their lives. As he said very well, conflicts endanger the freedom of the press, and the worst attack on this freedom is the killing of journalists. According to UNESCO, 9 out of 10 murders of journalists in the world remain unpunished. The IFJ fights this impunity. The IFJ also denounces the closure of Russian media, because “responding with censorship, with disinformation is a mistake”.

An alert platform was set up in 2015 at the level of the Council of Europe. It brings together media journalists but also organizations defending freedom of the press or human rights. The European countries sentenced by the ECHR are adapting their legislations but some refuse to do so. The ECHR is powerless to sanction them because it has no coercive power.

The IFJ would have elaborated in 2018 a draft declaration of the United Nations which has for principle to assimilate any assassination and attack against journalists as an attack on the freedom of the press and not to consider them as simple cases of common rights. It also proposes the creation of a body that could visit certain countries to demand accountability.

Mr. Lempen spoke about the information war, for example around Ukraine: there are several versions of the facts. He pointed out that social networks allow for freedom of expression but that they also provide governments with a means of controlling public opinion. Moreover, according to him there is a huge problem of content moderation by private social network companies.

As an organization defending journalists, they advocate for an international convention that would strengthen investigation and prosecution mechanisms. This would be an independent entity, made up of lawyers, who could take steps to systematically interview witnesses and prosecute.

After their interventions, a question and answer session followed. The questions they were asked were;

How far does freedom of the press go? How to support journalists under pressure from authoritarian governments? Have the EU and the EC been loud enough in the face of the Turkish government’s interventions in the media? Is the duty of journalism sufficiently protected by the Council of Europe and the United Nations? What do you think about the authentication systems with identification of individuals on social networks that some governments want to introduce? How can the European Commission further promote freedom of expression? What is its current role and how can it evolve in Brussels or Strasbourg?

To listen to the answers given to these questions please click here.

By assedel
European Court of Human Rights personnel and judges meet with litigators and NGOs bi-annually. Due to the emergence of the COVID-19 crisis,…
Legal Aid Service for MigrantsNewsProjects

By assedel
ASSEDEL is committed to ensuring the defense of vulnerable migrants who have encountered various difficulties in the exercise of their rights. In…