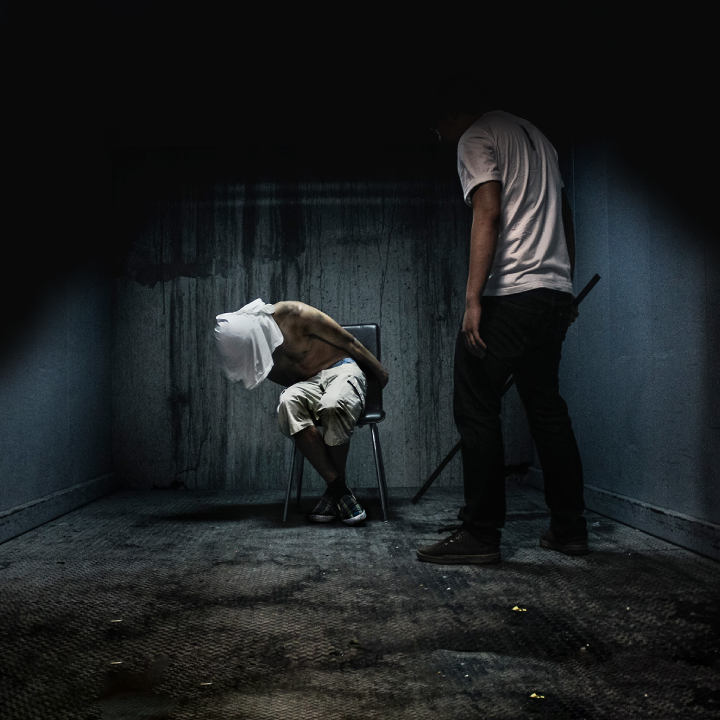 Although the torture is not a new phenomenon for Turkey, a significant increase was observed in number of cases after the coup plot of 20161. The government’s failure or more precisely reluctance to take a clear stance against torture and torturers, not to mention the efforts to legitimize the torture and the ill-treatment by the Minister of Interior, Suleyman Soylu, caused a strong reaction from the victims and human rights defenders.

Torture in the Turkish law

Nils Melzer, the UN special rapporteur on torture, stated that the allegations of torture and ill-treatment have gone up drastically in police custody, especially for individuals suspected of links to the Gulen movement or PKK. These individuals are subjected to severe beatings, electrical shocks, exposure to icy water, sleep deprivation, threats, insults, and sexual assault2. Also, according to a report that includes interviews with alleged victims published by Ankara Bar Association, victims said that “authorities blindfolded them and made them kneel, dragged them across a room, hit them on the head and body with a baton, and threatened that unless they “talked,” batons would be inserted into their rectums”3.

To better understand which acts may be considered as torture, we may consult the United Nations Convention against Torture and Other Cruel, Inhuman or Degrading Treatment or Punishment to which Turkey is party. This convention defines torture as follows:

“…any act by which severe pain or suffering, whether physical or mental, is intentionally inflicted on a person for such purposes as obtaining from him or a third person information or a confession, punishing him for an act he or a third person has committed or is suspected of having committed, or intimidating or coercing him or a third person, or for any reason based on discrimination of any kind, when such pain or suffering is inflicted by or at the instigation of or with the consent or acquiescence of a public official or other person acting in an official capacity. It does not include pain or suffering arising only from, inherent in or incidental to lawful sanctions.”

The article 17 of the Constitution of the Republic of Turkey forbiddens the torture:  “Nobody can be tortured; nobody can be subjected to any punishment or treatment incompatible with human dignity.” And in this sense the article 94 of the Turkish criminal code foresees imprisonment for the ones who commit torture:  “A public officer who performs any act towards a person that is incompatible with human dignity, and which causes that person to suffer physically or mentally, or affects the person’s capacity to perceive or his ability to act of his own will or insults them shall be sentenced to a penalty of imprisonment for a term of three to twelve years.”

However, the Human Rights Foundation of Turkey (HRFT) indicated that during the state of emergency process (OHAL) after the coup attempt, the government systematically made legislative changes that would undermine the prohibition of torture. For example, the investigation of the military personnel who allegedly participated in acts of torture and other ill-treatment was subjected to a special authorization. Further, the military personnel can not be held responsible retrospectively. Likewise, with the State of emergency decree, it has been stipulated that those who decide and take charge in matters related to the state of emergency will not have legal, administrative, financial and criminal responsibilities due to their duties, and absolute immunity has been imposed4. These changes try to legitimize the human rights violations which were already quite present in Turkey due to lack of transparency and to one man regime.

Actually, one can say that torture in Turkey is state-sponsored for obvious reasons: First, the torturers do not face any serious legal process for what they do, a lack of investigation in other terms, and in some cases they get promotion. Second, legal action against MIT (National Intelligence Agency) personnel can only be taken if the administrative unit approves, which never happens. Third, let alone not being concerned about the torture, the Minister of Interior justifies and encourages the torture with his discourses.

Backed by the support of the government, law enforcement agencies escaped the control of the accountability principle. The reasons that lead to impunity are listed by Human Rights Foundation of Turkey: the public officials who commit torture and the allegations of torture are not investigated ex officio, the investigations are not effective and independent, the application of a permit system for the trial of the public officials who have tortured, the suspension of punishments, and the mentality of the prosecutors and judges that are far from impartiality. As a result, the reasons for impunity become unspoken and unquestionable and eventually the torture takes its place as an ordinary act to take information from suspects. The Turkish government did not release any information on its efforts to address abuse through disciplinary action and training despite the allegations. In some cases, it was even expressed that officials sometimes countersued or intimidated individuals who made allegations of abuse in civil courts5. Furthermore, the US-based NGO Advocates of Silenced Turkey (AST) published a report that discloses the fact that the torturer Elif Sumercan, former deputy chief of the Ankara Police Department’s counterterrorism unit, is appointed as a department head at Turkey’s Ministry of Culture and Tourism6. It means that the government sent her away from the eyes of the public and awarded her by giving her a better position.

MIT (National Intelligence Agency) is also an important part of the torture in Turkey. It is mostly famous for enforced disappearances which are serious crimes under international law7. Human Rights Watch called the government to investigate disappearances and cited two examples: Gokhan Turkmen and Ayten Ozturk. Gokhan Turkmen was abducted by state actors on February 7, 2019, held in an unknown place of detention and tortured over nine months before being transferred to police custody and jailed. A similar case is alleged by Ayten Ozturk who was forcibly disappeared and tortured for more than five months before being officially registered in police custody. HRW concludes that there has not been any investigation into the allegations of forcible disappearance and torture8. The difficulty for prosecutors to investigate extrajudicial executions and other human rights violations  is that they have to obtain permission from the civilian leaders in order to try responsibles; because, under the law, members of the National Intelligence Service (MIT) are exempt from prosecution.

Another problem for the investigation of torture allegations is the Minister of Interior himself.  For example, two Kurdish peasants were tortured and thrown out of the helicopter in Septembre 11 by Turkish soldiers. Süleyman Soylu has attempted to justify the torture and the throwing of the helicopter, in which Osman Şiban was seriously injured and Servet Turgut lost his life. Also, in another case, the photographs of tortured Abdi Aykut were revealed in social media. He and other villagers were arrested and accused by AKP’s Interior Minister Süleyman Soylu as supporters of terrorism at that time and ultimately, they were acquitted at the court9. While Süleyman Soylu defended the images, saying “nothing is done except the rule of law”, the Ministry of Interior was sentenced to pay compensation to the villagers in the court. In addition, the aggressive discourses of Soylu are problematic as well. He accuses people without any evidence and uses insulting words easily, such as “traitor”, “terrorist”, “provoker”. The usage of this kind of words leads to dehumanization of targeted groups and to creation of hatred against these groups, mostly Gulenists and Kurdish civilians. It would be interesting to expect from security forces which are administered by such a minister to treat the ”suspects” lawfully.

After the so-called coup attempt in 2016, the allegations of torture have risen sharply. In this article only a few examples have been cited. To see other reported cases, please consult said report10. The torture and the ill-treatment became one of the characteristics of the authoritarian regime of Erdogan. The government agents act violently against Gulenists and Kurdish civilians on purpose, in custody, in prisons and in daily life. And it is clearly seen that the government does not take any measures against the torture and even protects the torturers. The power sometimes can give false impressions like immunity, but torture is not subject to statute of limitation. The responsibles of the acts of state-sponsored torture in Turkey will pay the price one day, before the national and international courts.

10. Systematic Torture and Ill-treatment in Turkey. Report of Advocates of Silenced Turkey. January, 2020.

Glorious history, dangerous present and a utopian future: a comparative discourse analysis of the Front National and AKP

“Are you a student ? Or are you a terrorist who attempted to invade the rector’s room and occupy it? This country…
Opinion

Human rights after Trump: Can Biden right the wrongs?

The concept of human rights is everchanging and developing; this concept of rights we identify as the bare minimum for all humans…