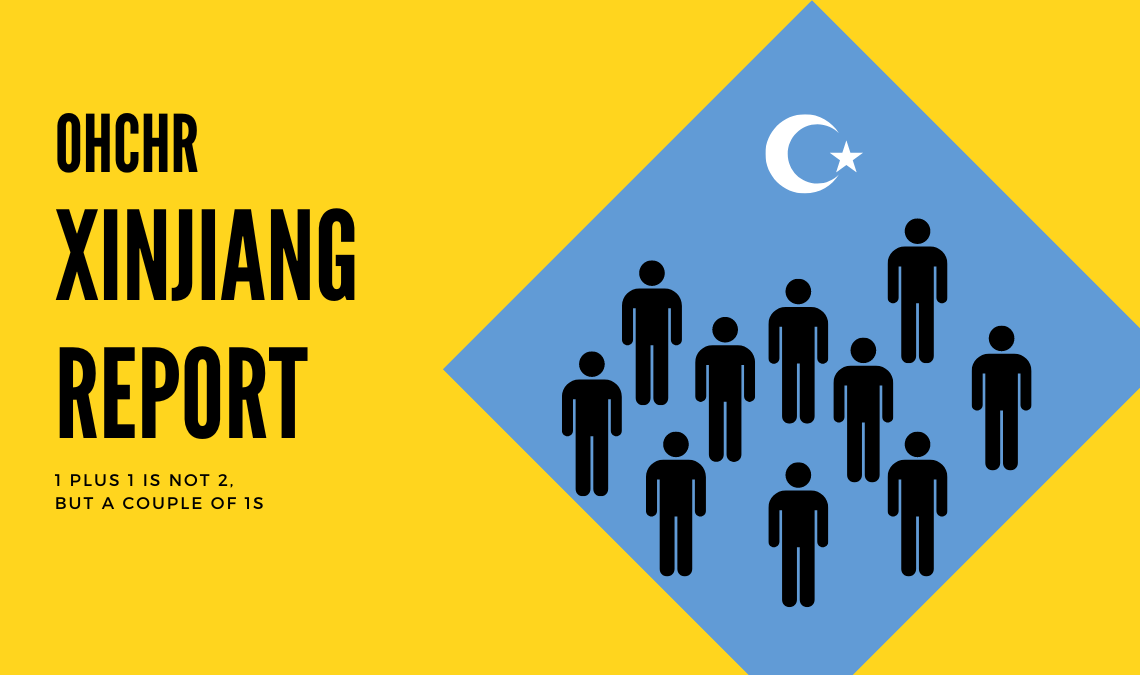 The most-awaited Xinjiang report of Michelle Bachelet was finally released on the last day of August just before her term in the Office as High Commissioner ended.i International community following the issue including Human rights activists, scholars and even states, particularly the United States who had already labelled the systemic extreme human rights violations as genocide, was hoping to use the report as Staff of Moses against China in the international arena. However, the report is far away from satisfying the expectations.

Besides being the first high level Human Rights delegate to have an official visit to China after seventeen years, Mrs. Bachelet’s visit was of a special importance regarding recently mounted atrocious oppression against ethnic minorities in the autonomous Xinjiang region by Chinese government. Therefore, as was warned by many scholars and activists in advance, the visit must have conducted vigilantly without any provocative and misleading direction of Chinese officials. Unfortunately, what was not desired happened in the same way envisaged before. International journalists were not allowed to attend the visiting group, the visit was held under the supervision of government officials, and some of the local people were allegedly blockaded to reach out the commissioner during her visit.ii After the visit, the commissioner delivered a press conference addressing her major concerns in rhetorical words without even touching upon the core subject matter. In the following days, she had to face a bombardment of heavy criticism, and announced her retirement after her term was finished at the end of August. Just before her term ended, she released her famous report.

The report in general puts forward some major violations by referencing the evidence and methodology of their accumulation. The fact that the violations for the last 6 years against Muslim minorities have been well documented made the commissioner’s job substantially easy. Nevertheless, the report does not go beyond establishing individual assessment of each type of problem suffered by the people in the region. Some argue that a great chance to make China step back in its extreme measures was wasted by the Commissioner by not concluding the systematic disappearance of cultural and physical existence of Uyghurs as “genocide”.iii

Here are the facts established by the report:

The main instrument to be used in the oppression of minority groups is so-called “educational centres”. Even though Chinese government insist on using the words “educational and vocational”, the witnesses experiences has revealed the de facto prison-like nature of those centres.iv They indicate that all activities are conducted under strict police surveillance, that the duration of stay is not communicated with the trainees, and that voluntary leaving is not possible. The report also mentions that there are consistent witness claims that many inhuman treatments ranging from beating, forcibly giving unknown medicaments to rapes, and placing birth control devices (IUDs) take place in the centres.

First part of the report highlights the recent changes in counter-terrorism act of China. With a formalistic approach, the commissioner explains how the extended scope of what constitutes a terrorist act in the legislation led to mass detention of Uyghurs in the region between the years 2016-2022. According to the report, in addition to not fulfilling the criteria of legal foreseeability, the vague wording of new legislation vests an immense margin of appreciation to law enforcement officers.v Furthermore, administrative authorities began sharing the competence with judicial branch on deciding to send someone to so-called re-education centres, the legal status of which is materially considered as detention centre, if that person is qualified as “extremist” according to the indicative list contained in the Xinjiang Region Regulation on De-extremification.vi

The report states that the targeted groups are “Uyghur and other predominantly Muslim ethnic minority communities”.vii The argument proposed by the Chinese government that the social campaigns and measures against terrorism apply to all citizens in the region is not tenable since the application criteria explicitly, both in practice and on paper, single out the Muslim groups from others.

Chinese government have been trying to decrease the population of abovementioned targeted groups in order to change the demographic structure of the Xinjiang region in favour of non-Muslim communities. To this end, while strictly applied to members of Uyghur community, existing family planning rules are not respected as the same level against other ethnicities.viii Secondly, forced disappearances lead to dissolving of the families, which have a direct impact on the birth rates taking the total number of involuntary disappearances after 2016 and following years.ix Last and the most detrimental measure taken by the government is to forcible place a device that stops fertility of a woman. This practice, along with the risk of imprisonment and internment, commonly takes place when family planning policy is not respected, according to the report.x

Most witnesses confirm that they were taken to camps by public security officials without judicial intervention.xi The criteria used by those administrative authorities include “wearing hijabs” and “abnormal” beards; expanding the scope of “Halal”; closing restaurants during Ramadan; participating in cross-county religious activities “without valid reason”; using social media and Internet to teach scriptures and preach; and giving one’s child a Muslim name.xii It is obvious that the government targets the cultural and religious existence of the Muslim minorities by punishing the ones who practice their religion in a peaceful manner.

The report shows that the government tries to re-structure the cultural and religious identity of targeted groups by imposing new behavioural patterns that are totally alien to those people. For example, in the re-education camps, trainees are forced to learn, memorise, and repeat loudly so-called “red songs” and other official Party materials to the extent that their face become red, and their veins appeared on the face.xiii Additionally, in the framework of “Visit the People, Benefit the People, and Get Together the Hearts of the People” campaign, over a million non-Muslim people living in urban areas were matched with Muslim local people in order to visit them at their homes and to spend days or weeks together. According to the witnesses, they are not allowed to practice their religion and must behave like their visitors during the stay.xiv

Considering the total number of people who experienced those camps has reached over a million in the last 6 years, it is obvious that the government has been arbitrarily and systematically oppressing the Muslim minority groups in the Xinjiang region. To what level? To the level the oppression turned into “Genocide”. The report’s findings explicitly put forward that the criteria for the genocide in “the Convention on the Prevention and Punishment of the Crime of Genocide (1948)” are totally fulfilled.

In the present Convention, genocide means any of the following acts committed with intent to destroy, in whole or in part, a national, ethnical, racial or religious group, as such:

However, the report does not bravely use the word “genocide”. What prevented the high Commissioner Mrs. Bachelet from signalling the elephant in the room seems totally political pressure. This can be understood from her choice to not continue her role in the Office by this September and from her intention to never cut the dialogue with Chinese government.xv The achievement of the report was to establish the facts in a methodical way in light of the consistent witness interviews. The biggest failure was that a historical chance to rein in the China’s arbitrariness was just missed because of the commissioner’s reluctance of voicing the result of the final calculation.

i OHCHR Assessment of human rights concerns in the Xinjiang Uyghur Autonomous Region, People’s Republic of China (hereinafter “the Report”) accessible on https://www.ohchr.org/sites/default/files/documents/countries/2022-08-31/22-08-31-final-assesment.pdf